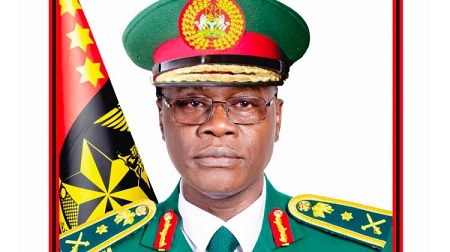 The Nigerian Army (NA) said it is set to deliver optimum services in the new year, having been satisfied with the achievements of 2021.

The Chief of Army Staff, Lieutenant General Faruk Yahaya who made the revelation spoke during the occasion of the 2021 Nigerian Army Finance Corps (NAFC), West Africa Social Activities (WASA), saying that 2021 was quite eventful in the force and that all the field training activities programmed for the year were successfully conducted as scheduled with support from President Muhammadu Buhari.

He said: “These exercises have significantly gone a long way in curbing and reducing criminality and other nefarious activities across the country.”

Yahaya also said that several projects such as the renovation of some barracks and offices, construction of new barracks and the upgrade of medical facilities were implemented.

“Also, procurement of arms and ammunition has been carried out with the support received from the Federal Government.

“As we commence yet another training cycle, I urge you all to remain committed in the discharge of your collective responsibilities of ensuring peace and stability across the country.

“We must remain focused, dedicated and resilient in order to consolidate on the achievements so far recorded,” he said.

Yahaya commended the Chief of Accounts and Budget, Maj.-Gen. Adekunle Adesope, officers and soldiers of NAFC for their selflessness in the financial management of scarce resources.

“One particular contribution worthy of commendation is the upgrading of dilapidated NAFC infrastructural facilities across all NA formations as well as the provision of new ones,” he said.

The COAS also paid tributes to fallen heroes who paid the supreme price to keep the country safe and one.

“May their gentle souls rest in peace and may the Almighty grant their families the fortitude to bear the losses.

“However, my appreciation also goes to our spouses and families for their unrelenting support and encouragement in the discharge of our duties,” Yahaya said.

He said that the NA would continue to look into the welfare of personnel and their families with the unshakable support of the Federal Government.

“We will not relent in our current effort at providing decent accommodation and other social amenities to our personnel in the Year 2022.

“We will also ensure that our troops are provided with adequate logistics in all operational areas,” the COAS said.

Also, the Chief Host of the occasion, Maj.-Gen Adekunle Adesope, said that the prompt electronic payment of allowances to troops in operational areas had impacted positively on the morale of the fighting troops in the frontline.

“I thank the COAS for approving resources as well as his commitment to training and the welfare of NAFC personnel.

“The NAFC would ensure that the financial resources appropriated in the 2022 Budget are utilised efficiently to maximize the attainment of such required capabilities by the NA,” Adesope said.